I’ve been shielding since before we started calling it that.

By the start of March it was obvious to me that people with conditions like mine are highly vulnerable to C-19.

So from 4 Mar I started taking measures to isolate myself, as much as possible.

Suddenly, this weekend (May 30/31), we have been told we are free to go out like everyone else, just maintain social distancing. No warning, no explanation of why, or how.

It is pretty clear virtually the whole medical and health establishment was taken by surprise. There is no obvious evidence to support this decision.

No sudden fall in infection rates, hospitalisations or deaths.

No ‘world class’, or any class, test track and isolate system functioning.

How did we end up here?

Back in early March, despite talk about allowing ‘herd immunity’ and ‘protecting the most vulnerable’ Government did and said nothing to help us.

As supermarkets and pharmacists began to get disrupted, the main fear for people like me was how were we going to get food and drugs?

Before even local government started to move, and long before central Government did anything at all, local communities started to rally round. Local religious groups began to organize shopping and other support for the most vulnerable.

Neighbourhood groups started to do the same. On our own new build estate our Facebook group, which includes about two-thirds of the dwellings, started sharing offers of help. The local authority did kick into action and began organizing things.

But from central government came a resounding silence. No guidance and certainly no practical help, until more than a month later.

The full “lock-down’ started on March 23, affecting everyone.

I did not receive official notification I was part of the ‘shielded’ group until April 25 in a letter from my GP. I had rung them the week before and at that stage they had no idea who was and wasn’t included or what the criteria were.

But it was not until May 7th that I got a text message from the “NHS Coronavirus Service”. These started to arrive daily, but then suddenly stopped after May 11th, for no obvious reason. I’ve never heard from them again.

When I tried to sign up for priority food deliveries one supermarket chain had me on their list from the government (Tesco) but another didn’t (Sainsbury – but they did eventually ‘find’ me a week later).

My GP letter told me to stay ‘shielded’ for 12 weeks from receipt of the letter – which meant until mid-July. The NHS Corona Virus Service text said until June 30, or until told differently by “a health care professional”. So my GPs instruction stood.

I have been following the Government advice, their various 3 stages, 5 levels, 5 tests plus briefings and guidance.

It was clear to me – I thought – that us ‘shielded’ weren’t going to told we could ease our isolation until the coronavirus was greatly reduced. On the Governments “Alert Levels” it looked like we’d need to be at Level 2 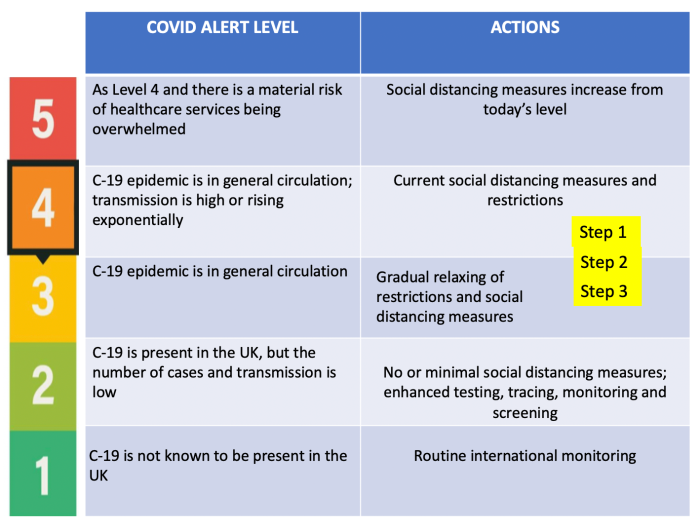 Source: constructed by me from various iterations of the Governments policies.

Those of us who have supposedly been shielded through this crisis have largely done it ourselves. We have help from local people and services, but very, very, little from central government. We built our own, local, shield walls.

Which is a good thing because despite this reckless, irresponsible, government who seem more concerned with protecting themselves, we will continue to protect ourselves.