Skip to content
HomeThe Silo in “The Silo Effect”

The Silo Effect – why putting everything in its place isn’t such a bright idea. 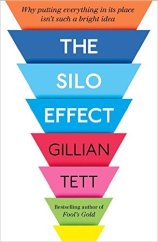 This is in many ways a good book, especially for people who have never come across or thought about the problems of large hierarchical organizations (private or public) and even for those of us who have.

Tett is an accomplished journalist, US editor of the FT and has a PhD in Anthropology.

Tett begins with three main tales of how ‘silos’ – hierarchical constructed compartments within or between organisations – can cause enormous problems (chapters 2, 3 and 4).

She then moves on to four chapters examining case stories of how silos can be ‘busted’.

All of this is highly entertaining and enlightening – as long as you know nothing about the subject to start with. Then you get really frustrated by Tett’s own personal ‘silos’.

The problem is ‘The Silo Effect’  suffers from exactly the problem Tett is addressing – tunnel vision caused by not stepping outside her own disciplinary silo, in this case anthropology, and I suppose contemporary journalism. If she had let other disciplines and history in she might have created a much better book.

The problems starts early on. In a ‘note from the author’ she outlines how she became aware of silos as she dug into the story of the Great Financial Crisis of 2007-8. She notices how people were trapped inside groups, tribes, structures, that limited their vision and contributed to no-one seeing the systemic risks that were building up.

Fair enough, but she then goes to talk about “this silo effect – as I came to call it – was not just a problem at banks.”

And there you have it in a nutshell: “this silo effect – as I came to call it”.

The idea of organizational silos has been around since 1988 as a term, and long before that as an idea but not called ‘silos’.

The introduction of the word ‘silos’ is generally attributed to an American organization development consultant called Phil Ensor, who first wrote about it here. Ensor had grown up on a farm and borrowed the word from the tall grain silos he knew as a kid. It took me 2 minutes on Google to find this out (I knew the term, of course, but not where it had originated).

The idea of functional or organizational hierarchies, and lack of co-ordination between them, had been around even longer. The profession to which Ensor belonged – organizational development – owed its entire existence to finding myriad ways to overcome ‘silos’. Kurt Lewin is widely recognized as a key figure in the 1950s, but OD as a movement took off in the 60s and 70s.

This might not be a problem if Tett didn’t then go on to proffer solutions to the “silo effect” without any reference to the mountains of research, theory and practice that preceded her ‘discovery’ of it.

Journalism, and dare I say it anthropology, are all about telling good stories – preferably unique and interesting ones. This book certainly tells an interesting tale. And the individual stories are unique. But you’d expect someone with a PhD – even in anthropology – to realize someone else just might have discovered and thought about these problems before?

It’s a pity because as I said at the start this is otherwise a great book. And still worth reading, even to an old hand like me who’s been struggling with these issues for more than 3 decades.